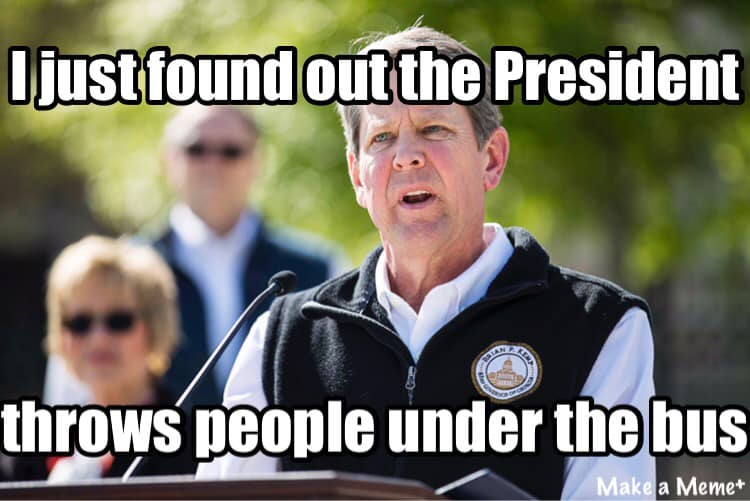 After weeks of Governor Kemp being made the laughing stock of late-night comedy, receiving the label COVIDIOT, and social media meme darling. During the WhiteHouse Briefing on April 21st, the same day that Governor Kemp announced his plans to put Georgians back to work and open up personal care businesses, such as hair salons, tanning beds, and exercise facilities, President Trump went on the records saying that he disagreed with Kemp. Trump went on to say he thought Kemp should adhere to the Federal Guidelines and wait an additional week before opening up non-essential business, and follow the CDC (located in Atlanta) guidelines of 14 days of declining positive cases of COVID-19. Video Replay of Conference: https://www.fox5atlanta.com/video/676797

However, reporting now indicates that Kemp made his initial decision with the support of the President, as the President had repeatedly called for LIBERATE protests around the country:
https://www.nbcnews.com/politics/donald-trump/trump-approved-georgia-gov-kemp-s-plan-reopen-early-president-n1191621

Dozens of Atlanta restaurants refuse to open to dine in patrons, and will remain offering pick up and delivery: https://atlanta.eater.com/2020/4/21/21229896/atlanta-restaurants-not-opening-april-27-dining-room-service-covid19?fbclid=IwAR2A8f0HL6xPFO_X4Vn3r9lFiUP50FkMZ1oidy66J3V1A4StILcLmAxQjG0